This article is adapted from our 1st print issue of 2016. For an overview of our Top 5 Corruption Busters, click here. 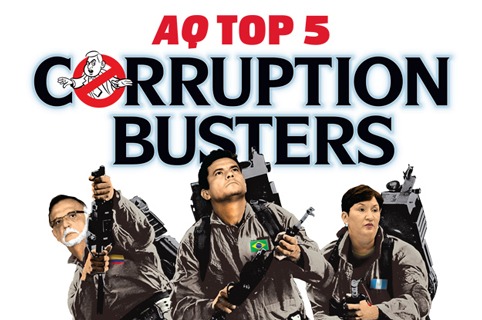 Visiting Iván Velásquez’s office is like entering an armed fortress. And no wonder.

Even before leading the investigation that caused the resignation and imprisonment of a sitting Guatemalan president, Velásquez was a man under pressure. As the head of the International Commission Against Impunity in Guatemala (CICIG), he was charged with investigating criminal rings that have long dominated parts of the country. Many of the outlaws have ties to drug cartels, and thus to resources that far outstrip CICIG — or Guatemala’s security forces.

So, for a long period in 2015, Velásquez was antagonizing both the narcos and a popular president. This wasn’t for the faint of heart. But it wasn’t his first dance, either. A Colombian-born prosecutor, Velásquez has spent much of his career pursuing drug traffickers. During the 2000s, his investigation into links between Colombian politicians and paramilitary groups often drew the ire of then-President Álvaro Uribe.

“His life in Colombia prepared him perfectly for Guatemala,” said Manfredo Marroquín, a political analyst. “But you have to admire the man’s courage. What he did, few could do.”

In an interview with AQ, Velásquez downplayed such talk, using the same cautious, unemotional language that has made him such an effective prosecutor. “Fear is not an element present in my analysis,” he said. “I don’t think about the risks.”

Instead, Velásquez said he feels greatly supported by Guatemalan society, much of which sees him as a historic figure on the path to a more law-abiding, peaceful society. His name shows up in graffiti all over Guatemala City —“Thank you, Iván!” and “I love CICIG!” At an event last year, Guatemalan Nobel Peace Prize winner Rigoberta Menchú Tum asked Velásquez to stand up and be recognized. The audience gave him a long standing ovation.

Such success was never a given. CICIG, the product of a unique arrangement between the United Nations and Guatemala’s government, has encountered periodic resistance since its founding in 2006. Staffed largely by non-Guatemalans, it could have been seen as a neocolonialist tool of foreign interests. In fact, successive Guatemalan governments have toyed with the idea of terminating CICIG virtually since its inception. But Velásquez worked hard to cultivate support in universities, the media and civil society, always delivering the same message: Build good institutions, and good things will follow.

“If people in the region really want to live in a democratic state of law, they have to strengthen judicial institutions. They have to be truly independent,” he said. “There’s a problem in many countries in the region,” he continued. “The political connections, the economic relationships of those who run judicial bodies, they keep investigations from going very far.”

“I think businesspeople have started to understand that the more efficient the judicial system is, the more guarantees they have for their investments,” Velásquez said. “You become less subject to the whims of politicians and individual judges. You have greater property rights.”

“That’s good for everybody.”

—
Winter is the editor-in-chief of Americas Quarterly.